Back in September I wrote about women in poker (read the original post here) and the blog generated some interesting discussion, including some comments that were so interesting that I felt they were worth publishing in a new post.

Wade Sickler (@TheBon_Scott on Twitter) made an argument I found interesting – males and females have different genetic traits and different hormone levels, both of which contribute to different brain chemistry. Hence, even men and women who grew up in complete isolation from society (and hence, would not have been exposed to the societal norms and harassment I spoke of in my original post) might prefer to partake in different activities.  In particular, the fact that testosterone is related to risk taking might suggest that men (who have much more testosterone than women, on average) are more likely to be attracted to a risk-taking game like poker.

Incidentally, I think this is the point that Daniel Negreanu was recently trying to make on Twitter.

Jo made the argument that her female friends tend to prefer games which are social, and which involve less ‘winning and losing’. She contrasts Risk – the long, drawn out war game, in which every turn each player wins or loses something to the benefit or expense of another player – and Monopoly, in which many aspects of the game involve a player getting lucky without it coming at the expense of another player (for example, drawing a lucky Chance card, or passing Go – lets forget landing on your friend’s hotel for a minute!). 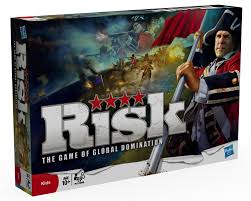 Risk, The Game of Global Domination

I think Jo’s argument holds true in the gambling industry. Those types of gambling which have more female players than male (bingo and slot games) tend to be those where your decisions are minimally related to the outcome and your own wins and losses have no impact on anyone else. Whereas games where women have especially low participation (poker, blackjack, or sports betting for example) have traits where your actions strongly determine the outcome and your wins and losses can directly impact others.

Incidentally, Jo is a former colleague of mine and mentored me when I was getting my start in the poker industry. Who knows where I’d be today if she hadn’t been one of the women who took up poker, in spite of it all.

Finally, David Fitzgerald wrote to me with his thoughts on the matter – much of which expands on what has been written so far. I thought his comments were so good that they should be published here verbatim. So I’ll sign off by saying once again that I think this is a complex issue that won’t be solved in a day. In the meantime, we can make genuine efforts to make poker a more welcoming game for everybody, and we can be smarter about the way that we bring up our children, so that in the future the opportunities afforded to men and women genuinely are equal.

Given the percentage of women playing poker dips from (up to) 19% for online games to 3-4% for live play, it suggests that there is a problem with cultural norms, intimidation and the locations at which females choose to spend their leisure time. Unaccompanied women are not as present as men in the public space during post-work leisure time, particularly in places like casinos.

Most non-resort casinos are awful places; they’re not the James Bond / Monaco ideal, nor are they the blue-collar place of choice for bargain-bucket surf ‘n turf followed by a splurge on a game of chance. They’re also largely devoid of atmosphere and have a sexist culture. Crossing the casino’s threshold can be off-putting to online-poker players regardless of gender but women also have to wrestle with cultural norms.

There can be a perception that the domain of the home is female whereas the outside world is male. For a woman to break through that norm it helps if she knows she will receive some rewards, intrinsic or extrinsic, preferably both. She receives such rewards when she goes to work, to college or engages in political activity. If she goes to a casino to play live poker, the situation become problematic.

A woman might believe she is violating gender roles by playing poker. Moreover, if she plays live, she might experience negative social consequences, such as intimidation. There is little intrinsic reward for her. She could make some extra money but the amount is proportional to the stakes so, unless she wins a tournament, and assuming she plays at a recreational level, the extrinsic gains are likely to be small.

Contrast that with the male online-poker player considering his first live game. Gender norms assure him it’s a man’s game within the male domain so he feels less discomfort and more self-worth. He receives intrinsic rewards. It is also a social arena for which he is conditioned because it is a contest so he, unlike the woman, is more likely to receive extrinsic rewards.

He is engaging in a Darwinian activity that could improve his status. A high status man, theoretically, has access to the complete pyramid of partners. A high status woman usually finds her selection of partners restricted to the pyramid’s top tier. A man plays poker to dominate others and, indirectly, get access to more partners. A woman could get abused and she might limit her selection of partners. She also earns little validation from her gender and, if she becomes successful, runs the risk of receiving a lot of misogynistic abuse.

It is a big price to pay for little reward. Furthermore, it is a stretch, but not that much of one, to conclude that some people think that unattached females in casinos are perceived to be prostitutes. It paints the rather brutal image that the reason a man might go to a casino is to make money and therefore have sex, but that a woman might be there to sell sex and therefore make money.

Part of the reason why unattached females aren’t more visible in the public arena during the evening is because some people believe that sex, or forming a relationship, is the reason women are out. It is also probably in the mix of reasons why female participation in poker tournaments increases in a way that seems to be index-linked to the host nation’s performance in the Global Gender Gap Index: heterosociality is correlated to the progress of modernisation.

As you write, these are issues that hard to address in the short term. However, we owe it to the advancement of society to try. To not be interested in the modernising of society is a betrayal of the intellect.

In the U.S., attitudes to women in the workplace were changed by the “Rosie the Riveter ” propaganda campaign. It indirectly helped to unravel the web of domination. By giving women the opportunity to spend more leisure time in the public arena, cultural norms should change.

At an individual level, we can make sure equality begins at home. Women spend more of their time than men doing unpaid work. Therefore, dual-income couples should make sure the domestic chores are equally split. At a group level we can pillory gasbags that make offensive comments. At the business level, casinos should address their sexism. There should be support for women who are abused. Both genders could call for the floor-person to help police the poker tables so the misogynists are tossed under the bus headed for modernisation.

These changes would help remove the cultural barriers that may be preventing some women playing live poker although it is unrealistic to expect to see a stampede of women at the casino door. Human behaviour is a gumbo of cultural norms, social relationships, power politics and the influence of hormones. Men have considerably more testosterone than women. Testosterone can promote feelings of separateness, it can make individuals more competitive and likely to take risks.

There are also different expectations of social behaviour. Some men show a preference for jokey camaraderie and in-group competition to win peer respect; whereas some women prefer having fun whilst cementing relationships through empathy and self-disclosure. I think this suggests that we’ll never see a 50/50 gender split at the WSOP main event. However, we could achieve a higher percentage than 5% by working to bring down cultural barriers.

We could also try an experiment based on the work of Amy Cuddy. Perhaps, one Friday afternoon at the MPN HQ, you could ask female members of staff to try one of Amy’s power stances for two minutes then give the participants the chance to choose between a game of poker and a bingo ticket.

I suspect we’d see a swing towards poker.

There we have it: All we have to do is fight ingrained sexism in casinos, make women more comfortable spending their evening leisure time outside the home and ask them to adopt a Wonder Woman stance for two minutes before they stride to the poker tables.
It should be a piece of cake.*

Alex Scott (@AlexScott72o) is Head of Poker at Microgaming, which operates the MPN.

Any opinions contained in this blog are the personal views of the author only, and not of any other person or organisation.

Join a poker room to get started

MPN is made up of several big name sports betting brands - which pool together their poker players to create more games, bigger tournaments and bigger promos.